This listing was posted on American Listed. 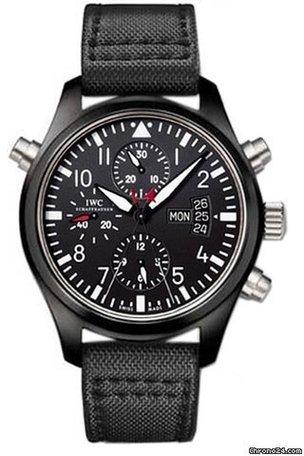 Tools
Price:
$9,500
Location:
New York, NY
Description:
Engine: IWC Calibre 79230 (28,800vph, 29 jewels)Functions: Hours, Minutes, Seconds, Chronograph with Split 2nd timingCrystal: Sapphire Crystal, double-coated, convex, pressure-drop resistantCaseback: Titanium with UNITED STATES NAVY FIGHTER WEAPONS SCHOOL Logo, engraving 'Pilot's Watch' and 'INTERNATIONAL WATCH CO.'Water Resistance: 60m / 200 feet (suitable for showering; not usually suitable for swimming; unsuitable for diving)Bracelet: Fabric - Black with Leather underside, seven holes, 37006 PABBracelet Width: 18.0 - 22.0 mmMax Wrist Size: 8.5 insClasp: Tang Buckle, Brushed, with IWC LogoCalendar: Automatic Day and Date at three o'clock. Quick-set day via crown position one, counter-clockwise. Quick-set day via crown position 1, clockwise.Crown Material: Stainless Steel Screw-down with IWC logoMass: 129.0 gBezel Function: FixedBezel Material: Zirconium OxideNotes: Soft iron inner case for magnetic field protection.IWC Schaffhausen has been building pilot's watches for professional use for more than 70 years. It knows what pilot's watches must be able to achieve and endure. The timepieces in its 2 lines of pilot's watches, Classic and Spitfire, all bear the rating "flight qualified". But it is about to get even better and more exciting. A new IWC pilot's watch carrying the "TOP GUN" logo of the American elite pilots is ready for take-off. The Pilot's Watch Double Chronograph Edition TOP GUN. Black. Big. With a case made of high-tech ceramic and operating elements in titanium. Its message is clear. Just as above-average skills are demanded of the graduates of the United States Navy Fighter Weapons School, IWC Schaffhausen has drawn its inspiration from the elite academy for pilots and in the TOP GUN has created a pilot's watch for the highest echelon of professionalism. The name says it all technologically and horologically. This exceptional watch with its black ceramic case, combined with titanium, bears the symbol of the best combat pilots in the US Navy discreetly on the case flank and recessed into the screw-down titanium back of the watch.The Pilot's Watch Double Chronograph Edition TOP GUN in its 46mm case is an uncompromising men's watch in the cockpit instrument look. Its functions establish its identity as a specialist in mechanical chronometry. Its split-seconds function permits the measurement, accurate to the 2nd, not only of stop times, but also of any desired intermediate times within a given minute. The red counterweights on the 2 chronograph hands form the silhouette of a fighter aircraft as they come together. The totalizers on the black dial record stop times up to twelve hours.TOP GUN creates a 3rd category of pilot's watches alongside the Classic segment, which has already produced 2 ceramic watches, and the Spitfire family. The 2 "black pilots" built so far with a zirconium oxide case, the Pilot's Watch Chronograph with Ref.3705 in a 39mm case from the year 1994, and the limited edition of 1,000 Double Chronograph watches, Ref.3786, with a case diameter of 44mm from the year 2006, remain coveted examples of the Classic range. Their rarity is justified, like that of the 1st Da Vinci in ceramic dating from 1986, by the intricate, time-intensive manufacturing and machining processes involved. Only a new, ultra-modern production method for the super-hard, non-magnetic, wear-resistant and acid-resistant blanks (CIM Ceramic Injection Moulding) makes the opening up of a 3rd segment within the IWC pilot's watches family possible with TOP GUN. Unlimited.Case blanks today can be moulded more efficiently and more accurately than previously from the mixture of zirconium oxide powder and binder. They are baked at temperatures between 1,500 and 2,000 degrees Celsius and then cooled in a complicated process to enable the material to acquire all its outstanding properties. Diamond-tipped tools are required for the intricate finishing of the blanks. The combination of ceramic and titanium for the case back and the operating elements is 1 of the distinctive features of all future TOP GUN models. In spite of the impressive size of the case, the use of modern materials, including the black nylon strap, enables a relatively low weight and comfortable wearing characteristics to be achieved.TOP GUN, in relation to an instrument of this class, naturally also implies max protection of the movement against magnetic fields by an inner case made of soft iron. It also includes securing the sapphire glass, which is coated on both sides, against displacement by a sudden drop in air pressure. The automatic movement, when fully wound, provides a power reserve of 44 hours. The watch also carries a day and date display on board, and of course the "spirit" of the United States Navy Fighter Weapons School in Fallon/Nevada, where the best combat pilots are trained.
Category:
Jewelry
Color:
Black
Posted:
December 30 2018 on American Listed
Tools

To learn more, visit the Safety Center or click here to report this listing.